Best Places to Visit in Kathmandu

Kathmandu is the capital city of Nepal, and it is also known as the city of temples. This part of Nepal has got lots of significant histories and historical landmarks. Kathmandu is also the main entry point of foreign travelers, and one of the biggest tourist destinations of Nepal.

Stepping into Kathmandu is like stepping into a different world that everybody should experience at least once in their lifetime. Kathmandu has a lot to offer than one can even imagine. And, one week also is not enough to explore every corner of this bustling city. Find some of the best places to visit in Kathmandu Valley.

Kathmandu Durbar Square is one of the UNESCO World Heritage Sites also known as Hanuman Dhoka Square/Basantapur. It is one of the main attractions in Kathmandu Valley. The name Hanuman Dhoka Durbar is originated from the statue of Hanuman set up by King Pratap Malla at the passage of the regal royal residence in 1672 A.D.

There are many temples, shrines, courtyards, and a palace inside the Durbar square that reflects the art and architecture of medieval times. You can take a look at the full-day Kathmandu Day Tour if you are interested to visit Kathmandu Durbar Squire in Kathmandu.

Legends say that The Swayambhu was conceived out of a lotus blossom that sprouted amidst a lake that once spread over the Kathmandu Valley. The biggest picture of the Sakyamuni Buddha in Nepal sits on a pedestal on the western limit of Swayambhu. Behind the ridge is a temple committed to Manjusri or Saraswati - the Goddess of learning. Chaityas, statues, and holy places of Buddhist and Hindu divinities fill the stupa complex.

The Swayambhunath Stupa is one of the places that you should not miss visiting on your Nepal Holidays. Take a look at the Glimpse of Nepal Package, if you are planning to visit Kathmandu.

Patan is also popularly known as Lalitpur, the most seasoned of all the three urban communities of Kathmandu valley. It is best known for its dominating legacy. It is most likely one of the established Buddhist towns on the planet. The city is encompassed by 4 Stupas as 4 corners of Patan, one at each side. These stupas are said to have been built by the well-known Emperor Ashoka.

To describe the excellence of Patan, a western woman essayist stated that - "Patan implies forever itself and Patan Durbar Square is the dynamite sight of Asia for sure". See the Patan & Bhaktapur Day Tour, if you are planning to travel to Nepal.

Famous for its religion, culture, and verifiable legacy, Bhaktapur is an open exhibition hall. This town is wealthy in antique arts, religious monuments, astounding social conventions, handicrafts, and ancient statues.

Moreover, the city is likewise acclaimed as a city of divine lives. Bhaktapur has a bunch of sanctuaries, pagodas, landmarks, yards, squares, conventional houses, aesthetic stones, taps, and additionally Buddhist cloisters built on various occasions of history. Take a look at Spirit of Nepal that includes a tour to Bhaktapur Durbar Squire.

Changu Narayan Temple is known as the oldest temple in the Kathmandu Valley. The statue inside the temple shows Vishnu as Narayan, the creator of all life. However, the delightfully improved metal-plate entryway is opened for ceremonies, and only Hindus are allowed to enter.

Moreover, the Garuda figure facing the west entryway is said to date from the fifth century. The Chagunarayan Temple is one of the places that you should not miss seeing on your Nepal tour. Take a look at the Nagarkot & Chagunarayan Temple Tour for the detail.

Devoted to Lord Shiva, Pashupatinath is one of the four most vital religious sites in Asia for devotees of Shiva. Built-in the fifth century, and later redesigned by Malla rulers, the site itself is said to have existed from the earliest starting point of the thousand years when a Shiva lingam was found here.

The biggest temple complex in Nepal, it extends on the two sides of the Bagmati River which is viewed as heavenly by Hindus. The Pashupatinath temple is one of the most visited places in Kathmandu. Find the detailed itinerary of the Kathmandu Transit Tour, which also included a visit to Pashupatinath Temple.

Located 8 km toward the east of downtown Kathmandu, Boudhanath is a standout amongst the most imposing tourist spots in Kathmandu. The 36-meter-high stupa of Boudhanath is one of the biggest stupas in South Asia.

With incalculable religious communities encompassing it, Boudhanath is the focal point of Tibetan Buddhism in Nepal. See the Taste of Nepal itinerary to know more about the itinerary and cost of the tour.

On a peak north of Bodhnath, Kopan is famous among outsiders for its courses in Tibetan Buddhism. Kopan Monastery was established by Lama named ‘Thubten Yeshe’, who passed away in 1984, prompting an overall search for his reincarnation.

A youthful Spanish kid, Osel Torres, was proclaimed to be the reincarnated lama. Lama Tenzin Osel Rinpoche never again lives at Kopan (he later disavowed his promises to wind up a cinematographer in Ibiza).

The Garden of Dreams

A neo-traditional authentic garden, Garden of Dreams is one of the popular sites inside Kathmandu for spending a few hours.

The Garden was renowned as 'The Garden of Six Seasons, which was made by late Field Marshal Kaiser Sumsher Rana (1892-1964) in mid-1920. After the fruition of this Garden, it was considered as a standout amongst the most modern private greenhouses of that time.

People from everywhere throughout the world can visit this museum. Still many sections of this museum are prohibited to enter by the public and strongly guarded by the army.

The Budhanilkantha statue of the Hindu god Vishnu was discovered around 10 kilometers from the main point of Kathmandu at the base of the Shivapuri Hill, which is the biggest and most precise stone carving of Nepal. The Budhanilkantha statue is 5 meters long and lies in a leaning back position inside a recessed tank of water (representing the cosmic sea) that is 13 meters long.

Called the Sleeping Vishnu, or Jalakshayan Narayan, the statute describes the god leaning back on the winding curls of the inestimable snake (Shesha is the everlasting, multi-headed lord of the snake deities known as Nagas, and is the devotee of Vishnu).

Balaju Garden is located three kilometers northwest of Kathmandu and is a tranquil park perfect for unwinding yourself from the hustle and bustle of city life. Built-in the eighteenth century, the recreation center has a line of 22 stone water gushes, and every one of them has an ornamentally carved crocodile head.

Particularly for the royal family who was prohibited from visiting the real Budhanilkantha temple, one of its replicas was built here so that royal family members can visit here instead.

Kirtipur presents an incredible Newari culture, the indigenous culture of the Kathmandu Valley. Likewise, Kirtipur is the starting point of several days hiking to close hills like Champa Devi from where the impressive view of the Himalayas can be seen on a clear day. Moreover, the town presents ancient homes and temples constructed with precise architecture.

Enjoy the best Newari food while you are here and explore the town on the cycle for a better experience.

Bungmati (Bungamati) is the origination of Rato Machhendranath, viewed as the supporter of the valley, and the huge shikhara–style temple is the focal point of the town square.

The chowk around the temple is a standout amongst the most places in the valley – where one can see the core of a working Newari town. Find a tour of Bungmati with the cost, itinerary, etc.

Khokana is another pleasant Newar town located south of Kathmandu valley. This Newar town is mainstream for cultivating mustard seed, and its products like mustard oil.

The famous Rudrayani temple is located here and has an excellent design with its pagoda style. Just opposite this temple, there is a goat-sacrificing pond, and every year during a festival, locals sacrifice goats here as a gift to the ditties. We also have a day tour to Khokana Village, if you are interested to visit Khokana Village.

Pharping is a flourishing Newari town whose ancient Buddhist pilgrimage sites have been assumed to control by vast numbers of Tibetans. A circuit of these religious destinations makes a convincing outing from Kathmandu.

Increasingly Buddhist religious communities are opening up around here consistently, some of which acknowledge outside dharma understudies as well. A perfect place to rejuvenate in the tranquility and blessed aroma of the monasteries. Find a Day Tour which also includes a visit to Pharping Monastery.

Dakshinkali Temple is a standout amongst the most popular sanctuaries in Nepal. This temple is committed to Kali, the dreadful incarnation of Lord Shiva's wife, Parwati. This Dakshinkali temple is located southwest of Kathmandu, which is a forty-five minutes’ drive-by vehicle.

Hundreds of devotees gather in a vast mass particularly on Tuesday and Saturday where they more often sacrifice cocks and male goats. The Dashain celebration in October month is an authentic celebration here. The Tour of Dakshinkali is available on this page.

The entire view (Birds eye perspective) of Kathmandu valley can be seen from here most astoundingly. On the off chance that you are looking for fervor just as tranquility, this is the perfect place that you can visit.

Chandragiri Hill, seven kilometers from Thankot, lies on the South-West of Kathmandu Valley and is 2,551 meters above sea level. On a clear morning, one can see captivating views of the Himalayan Ranges from Annapurna to Everest.

There are also options for hiking like you can hit the trail to Chitlang and several other places from here. There are numerous hotels and restaurants located up here to make the trip more joyful and comfortable.

Kakani is a town in the Nuwakot District of the Bagmati Zone. This place is well known for all-encompassing mountains views of Annapurna (8,091 m), Manasalu (8,156 m), Ganesh Himal (7,422 m), Langtang Lirung (7,227 m), and several other mountains.

One can likewise observe the common excellence of the Kathmandu Valley, the general population, and their way of life and conventions.

Kulekhani is located in the Makwanpur district, and it is one of the famous places for fishing, hiking, trekking, and boating. Moreover, Kulekhani is also widely known for its hydropower plant.

The region presents a beautiful landscape view. One can reach Kulekhani in several different ways but, a drive through the Dakshinkali- Hetauda highway and hiking of around 19-20 km from Naubise are the two main ways.

Lakuri Bhanjyang is heaven located 13 kilometers up from the Garko (Lalitpur). It is a standout among the most beautiful sites in Lalitpur. Lakuri Bhanjyang is famous for its breathtaking dawn views along with the Himalaya Ranges when the climate is clear.

People regularly visit Sakurai to see the stunning sunrise. The entire view of Kathmandu, Lalitpur, and Bhaktapur can be seen from Sakurai. 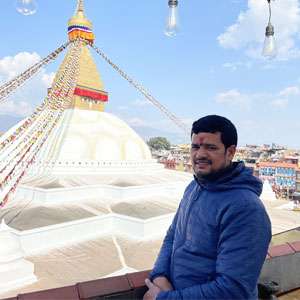