Bhutan is a small country located in South Asia between China and India. The south part of Bhutan is respectively hot with a humid atmosphere, temperature varies from 15 to 30 degrees in this part. The temperature is comparatively low and cold in the northern part, as it is near the mountains.

Bhutan is rich with precious culture and diversity, and there are many celebrations, Every single village has its celebration. Bhutan is a cultural and religious country, and now also known as the Land of happy people.
Bhutan has a strict policy for tourism as you should do only arranged and guided tours in Bhutan. You must book a Bhutan tour in advance through an authorized tour company. We have given a list of the places in Bhutan that you should not miss when you travel to Bhutan.

Taktsang Monastery is located above the Paro valley, which is perched on a ledge halfway up the cliff face of the mountain, the monastery is renowned around the world for its unique and spectacular position. 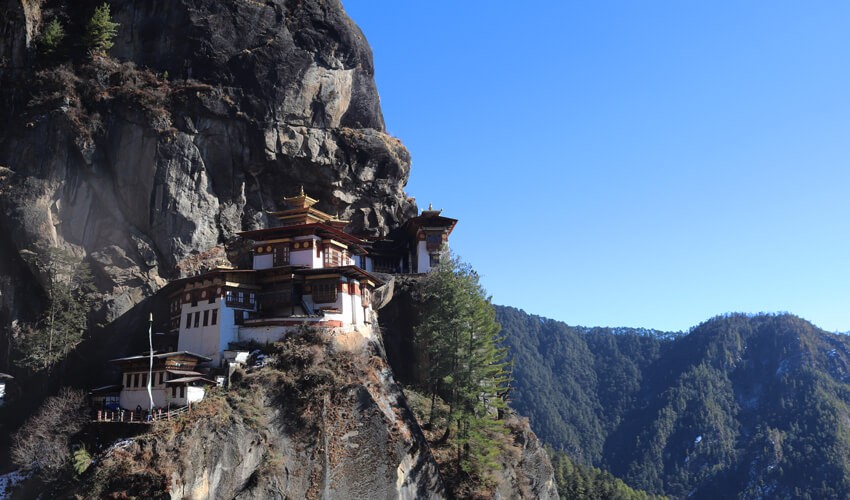 The Taktsang Monastery is one of the most popular places and visited places in Bhutan, and thousands of travelers travel to Bhutan to visit Taktsang Monastery every year. You have to hike about 2 hours from the bottom to reach the monastery, However, horses are available to ride as well. The tour of Taktsang Monastery in all the tour package of Bhutanand in the Short Bhutan tour.

The Buddha Dordenma Statue is 169 feet tall and built at the foot of the hills in Thimphu valley, Bhutan. The iconic gold and bronze statue is visible from almost anywhere in Thimphu, and it is one of the most popular tourist attractions of Bhutan. 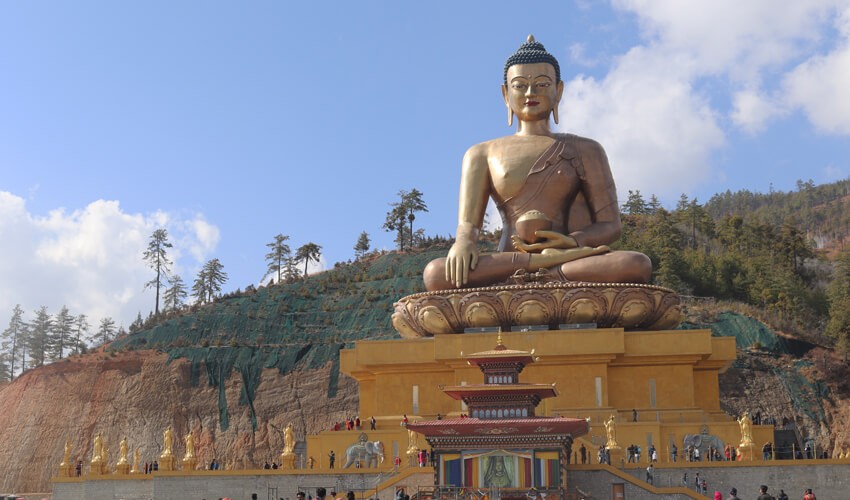 Buddha Dordenma Statue is a giant golden Shakyamuni Buddha statue constructed to commemorate the anniversary of the fourth king of Bhutan Jigme Singye Wangchuk. The statue was constructed in 2015 AD, and the construction cost was almost US $100 million. It is believed that the statue was mentioned as the “second Buddha” by Guru Padmasambhava in the eighth century.

Buddha Dordenma is the place that you should not miss on your Bhutan tour. The Nepal Bhutan tour includes visit of this statue.

Tashichho Dzong is another remarkable architectural structure in Thimpu, Bhutan, that you should not miss visiting in your Bhutan tour. Tashichho Dzong is the seat of the government of Bhutan, and it is commonly known as Thimpu Dzong as well. 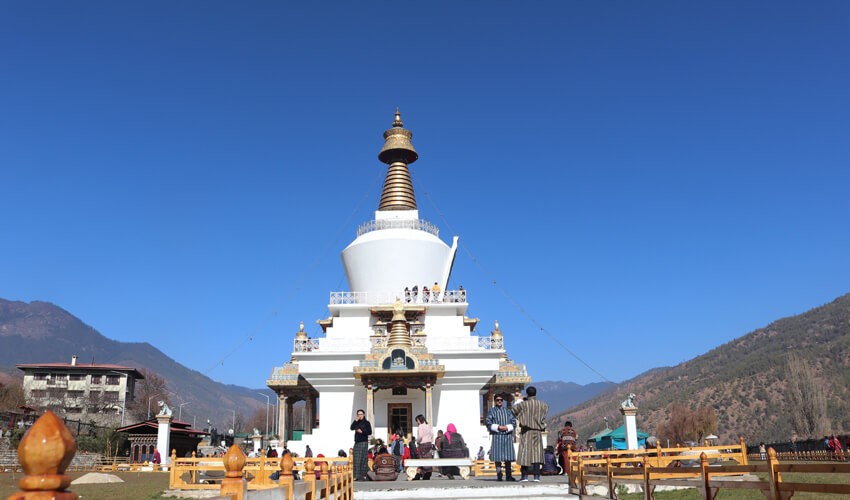 Thimpu Dzong has an impressive structure with whitewashed walls, golden, red, and black wood, and gardens on a backdrop of blue sky. The Dzong was built in 1641 AD by Zhabdrung on the grounds of Dho Ngon Dzong, and it caught fire a few times in history.

The visit of this dzong is included in most of the tour packages of Bhutan tour that includes Nepal Tibet Bhutan tour.

Punakha Dzong is one of the best places to visit in Bhutan. The Punakha Dzong is the second largest dzong in Bhutan, and it is known for its vivid structure, history, and story. Punakha is the winter capital of Bhutan and is located at an altitude of 1,200 meters above sea level. 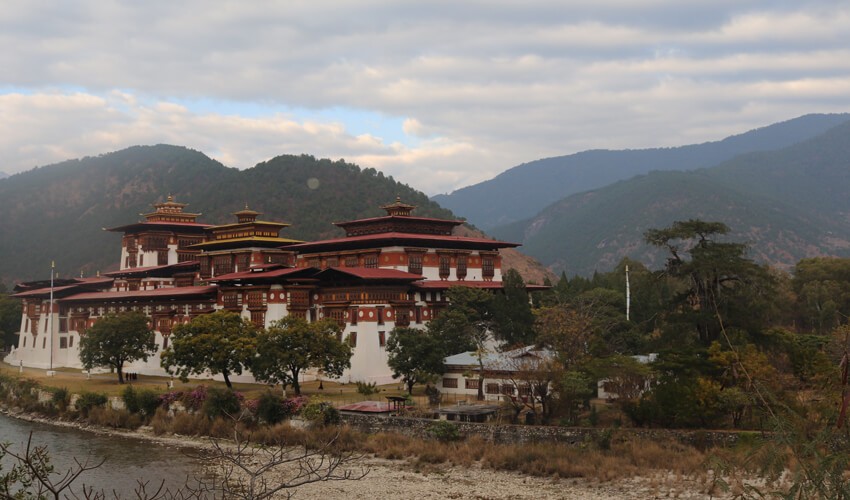 Punakha Dzong is considered to be the most beautiful place in Bhutan to visit, and the first national assembly was held here in 1953 AD. It is one of the most famous tourist attractions for tourists in Bhutan and one of the places that you should not miss on your Bhutan tour.

Phobjikha is a small town in the central part of Bhutan and bestowed with valleys, surrounded by mountains and lush greenery, and known for beautiful landscapes. 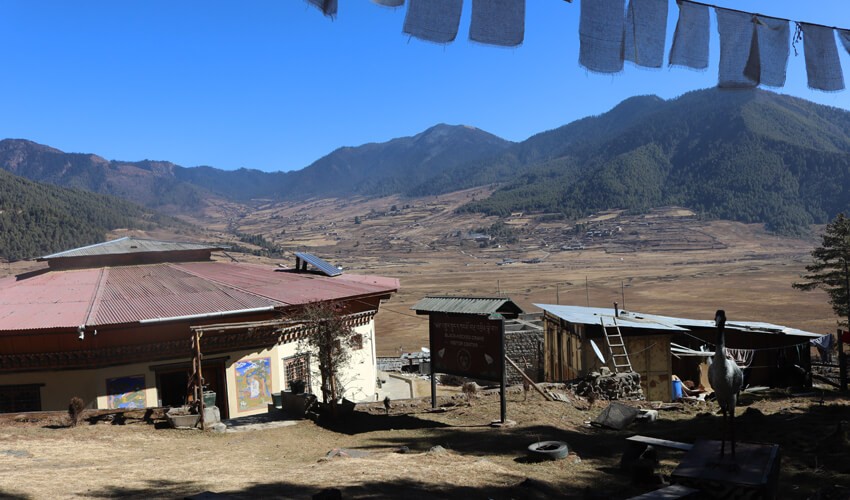 Phobjikha valley is located at an altitude of 3000 meters above sea level and the border of the Jigme Singye Wangchuck National Park. The main attraction of this place is to get to experience the big flock of black-necked cranes during the winter season. The valley is an important wildlife sanctuary in Bhutan, you can also see barking deer, and it is the home to leopards, wild boars, red foxes, Himalayan black bears, and many other wild animals.