based on 1 review
View Map

Mustang is the former Kingdom of Lo and now a part of Nepal, located in the north-central part of the country, bordering with Tibet on the Central Asian plateau between the Nepalese provinces of Dolpo and Manang, The Kingdom of Lo, the traditional Mustang region, and "Upper Mustang" are one and the same, comprising the northern two-thirds of the present-day Nepalese Mustang District, and are well marked by official "Mustang" border signs just north of Kagbeni where a police post checks permits for non-Nepalese seeking to enter the region, and at Gyu La (pass) east of Kagbeni.

Trekking in Upper Mustang Region is very popular in Nepal and it is one of the most mysterious trekking regions in Nepal. The landscape of this region is a barren moonscape of eroded sandstone pillars and discontinuous moraine terraces, which together present a colorful mosaic made up principally of earthen reds, yellows and brown.

Upper Mustang is relatively easy trekking along the permitted route to Lo Manthang, lies in the heart of Mustang. The trek to Mustang is through an almost treeless barren landscape, strong winds generally howl across the area in the afternoon and low at night.

Mustang is considered to be the rain shadow areas of the Himalayas, the result, there is much less rain in comparison to whole country of Nepal. Mustang is one of the few places in the world that has long-lived a very close-niche life. The interesting is that the region was inaccessible to outsiders until some years back. This isolation Mustang owns a unique lifestyle and cultural heritage of people living in the area, which has remained almost unchanged for centuries.

The majestic Himalayan ranges of Dhaulagiri and Annapurna are hidden behind this area; Mustang is filled with beautiful trekking zones. With this all the features, special trekking permit is required for all the trekkers from the government registered trekking company in Nepal and Escape Nepal Holidays has long been organizing the trekking in the area, therefore, you do not need to worry, if you want to go and explore this unique area of the world.

Upper Mustang is organized during all year and it is possible to trek in the area in the rainy season as well. This isolated kingdom of Mustang prospered in the 15th century, when its strategic location enabled to salt trade between Tibet and Nepal. The landscape of Mustang is dry, naturally carved sandstone pillars and discontinuous moraine terraces, these all present naturally a colorful variety made up of red, yellow and brown together.

Normally, trekking in to upper Mustang is privileged to have an experience the life, who have been residing calmly, even in such harsh environment. The trekking in Upper Mustang is quite similar to trekking in Tibet; as geographically it is a part of Tibet. Interesting is that, this was a part of Tibetan Kingdom of Gungthang until 1830's. The medieval wall city of Lo Monthang, unofficial capital of Mustang still remains a kingdom. It is rich in culture and religious heritage. The history of Lo Monthang is based on myth and legend rather than the recorded in detail.

Upper mustang trek begins with a day tour in Kathmandu, you then drive to Pokhara and take short flight to Jomsom. The trek starts from Jomsom and allows you to explore a weird and wonderful landscape of eroded conglomerate cliffs, colored by natural earth coloring -- red, yellow, brown and blue. Trekking across passes of up to 4100m, you also trek through a succession of picturesque white painted Mustang villages and Tibetan monasteries, set against a backdrop of the distant snow-capped peaks of the Himalayas. You have a day to explore our ultimate destination for excursion in Lo Manthang, a fairy-tale walled city and the capital of Mustang. The Mustang trekking adventure to Mustang in Nepal entices to them who love to explore special part of the Himalaya and finally by flight from jomsom, youreturn to Pokhara and drive to Kathmandu.

Day 1:Arrive at Kathmandu airport and transfer to hotel

You will be met & greeted by our airport representative who will be on standby to pick you up and transfer you to hotel. Your evening is free and after you’ve refreshed, you can go for a stroll down the street to get familiar with the surroundings.

After having breakfast at hotel, you go for sightseeing tour in Kathmandu and you are escorted by a professional tour guide.

The tour include visit of Kathmandu Durbar Square, Monkey Temple – Swayambhunath, Pashupatinath Temple and Bauddhanath Stupa and return to hotel.

Day 3:Drive from Kathmandu to Pokhara

You drive along the scenic Trisuli and Marsyangdi River to reach Pokhara, it’s a pretty good drive as you go by the beautiful river. You view Ganesh Himal and the Manaslu peak as well during the drive.

The Pokhara is a tourist's paradise full of natural as well as cultural heritage sites such as lakes, caves, & temples of Buddhist and Hindus along with her lovely mountains; after 6 hours of drive, you arrive in Pokhara, the city of lake, Welcome to this beautiful town of serene lakes that gives so much meaning to your holidays.

Day 4:Fly from Pokhara to Jomsom and trek to Kagbeni

You take the spectacular early morning flight to Jomsom. Just out of Jomsom then cross a suspension bridge and then walk along the riverbank of the Kali Gandaki.

The trail is quite barren with craggy rocks and sand and is mostly flat, which makes it very easy going. It is also very picturesque, with views of big peaks all around such as Dhaulagiri, Tukuche and Nilgiri, whilst to the south can be seen the entire Annapurna Massif.

Day 5:Trek from Kagbeni to Chuksang

Today, you trek right up to the river valley, but you use a combination of the high trail and the riverbank pathways. The trail then widens significantly revealing an endless stretch of sand on the west bank of the river. You stop for lunch at the village of Tangbe, where you come across the first black, white and red chortens that typify Upper Mustang.

The little town is a labyrinth of narrow alleys among white washed houses, fields of buck wheat and barley and apple orchards. Nilgiri Peak continues to dominate the southern skyline. Chusang village is only about a 2hrs walk beyond Tangbe at the confluence of the Narshing Khola.

Day 6:Trek from Chuksang to Samar

There is a distinct change here, not only in the topography, but also in the culture, lifestyle and people, and the settlements become more scattered, smaller and more basic.

The people of Lo or Mustang practice agriculture. Lack of rain and fertile soil, cultivation is carried out in sheltered plots of land, covering the brown landscape with patches of green vegetation. Continuing north, you reach a huge red chunk of conglomerate that has fallen from the cliffs above, forming a tunnel through which the river flows.

The trek now leaves the valley and climbs steeply up a rocky alley to the village of Chele. From Chele, you climb a steep spur and then continue ascending along the side of a spectacular steep canyon to a pass. Beyond the pass, you descend on a pleasant trail to Samar.

Day 7:Trek from Samar to Geling

Today, you climb above Samar to a ridge and then descend into a large gorge past a chorten before entering another valley filled with juniper trees.

You then cross a stream and after climbing to a pass, you descend along a ridge to Shyangmochen a tiny settlement with a few tea shops. Nearby is Rangbyung, a cave containing stalagmites which have formed in the shape of chortens. The trail climbs gently from Shyangmochen and enter another huge valley before descending to Geling with its extensive fields of barley.

Day 8:Trek from Geling to Ghami via Ghami La

From Geling the trail climbs gently through fields, up to the center of the valley, passing above the settlement of Tama Gun and an imposing chorten.

You then begin a taxing climb across the head of the valley to the Nyi La [3840m]. The descent from the pass is quite gentle and about half an hour further on you come to a trail junction; the right trail is the direct route to Charang, the left trail leads to Ghami. Ghami is a large white-washed village sheltered by overhanging cliffs.

Today's walk is through perhaps the driest part of Mustang. However, the magnificent views of the countryside, from the gentle contours of the north to the rugged mountains in the east and west, are a source of inspiration.

You come to Charang, a large spread-out village at the top of the Charang Chu canyon. At the eastern end of the village are a huge fortress and a red gompa which houses an excellent collection of statues and thangkas.

Day 10:Trek from Tsarang to Lo-Manthang

Today, you spend part of the morning exploring the interesting village of Charang and its large monastery, before setting out for Lo Manthang.

You climb gently above the valley to a large isolated chorten that marks the boundary between Charang and Lo. The trail then broadens and eventually you get first view of the walled city of Lo Manthang. The town has only one entrance so you circumambulate the wall to the gate on the north east corner.

Day 11:Rest at Lo-Manthang to explore

Today, you explore the surrounding areas. Visit Namgyal Gompa and Tingkhar in Lo Manthang. Namgyal Gompa situated on a hilltop serves as an important monastery of the local community, and also as a local court. After visiting Namgyal Gompa continue the tour to Tingkhar, the last main village to the northwest of Lo-Manthang.

Day 12:Trek from Lo-Manthang to Ghami

You continue trekking on the highland route, crossing alpine meadows before dropping down a steep eroded alley to Dhakmar for lunch. After lunch, you walk through the pretty valley, climb to a ridge and descend from there back to Ghami.

Day 13:Trek from Ghami to Samar

Leaving Ghami, You begin to follow narrow winding path until you reach Geling crossing a small stream. On the way, you can enjoy good view of the Nilgiri Mountains, deserted landscapes, Tibetan style villages, farming terraces and natural vegetation.

Day 14:Trek from Samar to Kagbeni

Following a descending path you reach Chuksang crossing a suspension bridge over Kali Gandaki. You walk along the bank of Kali Gandaki with views of natural vegetation and apple orchards.

Day 15:Trek from Kagbeni to Jomsom

Today, the trail passes through the bank of Kali Gandaki passing through Eklebhatti. The trail is windy in the early afternoons.

Jomsom is the headquarters of Mustang. From here you can have access to the internet and banking facilities.

You take early flight to Pokhara, and check in to hotel and rest of the days are free.

Day 17:Drive from Pokhara to Kathmandu

The Tourist bus leaves at 7 AM after b/fast to drive to Kathmandu and the driving is a fantastic experience as you drive past many satellite towns on the way and you are able to see rural settlements, gushing rivers, terraces and green rural landscapes

Day 18:Transfer to the airport for your departure

You will be transferred to the international airport for your final departure to your loving home.

I have the chance to arrange my trek last year. everything was excellent - trek, city trip, hotel accommodation.....Kathmandu at night....farewell dinner. If you are looking for a budget trek - this is your company! go ahead without doubts.

Enjoy Nepal as much as you can. 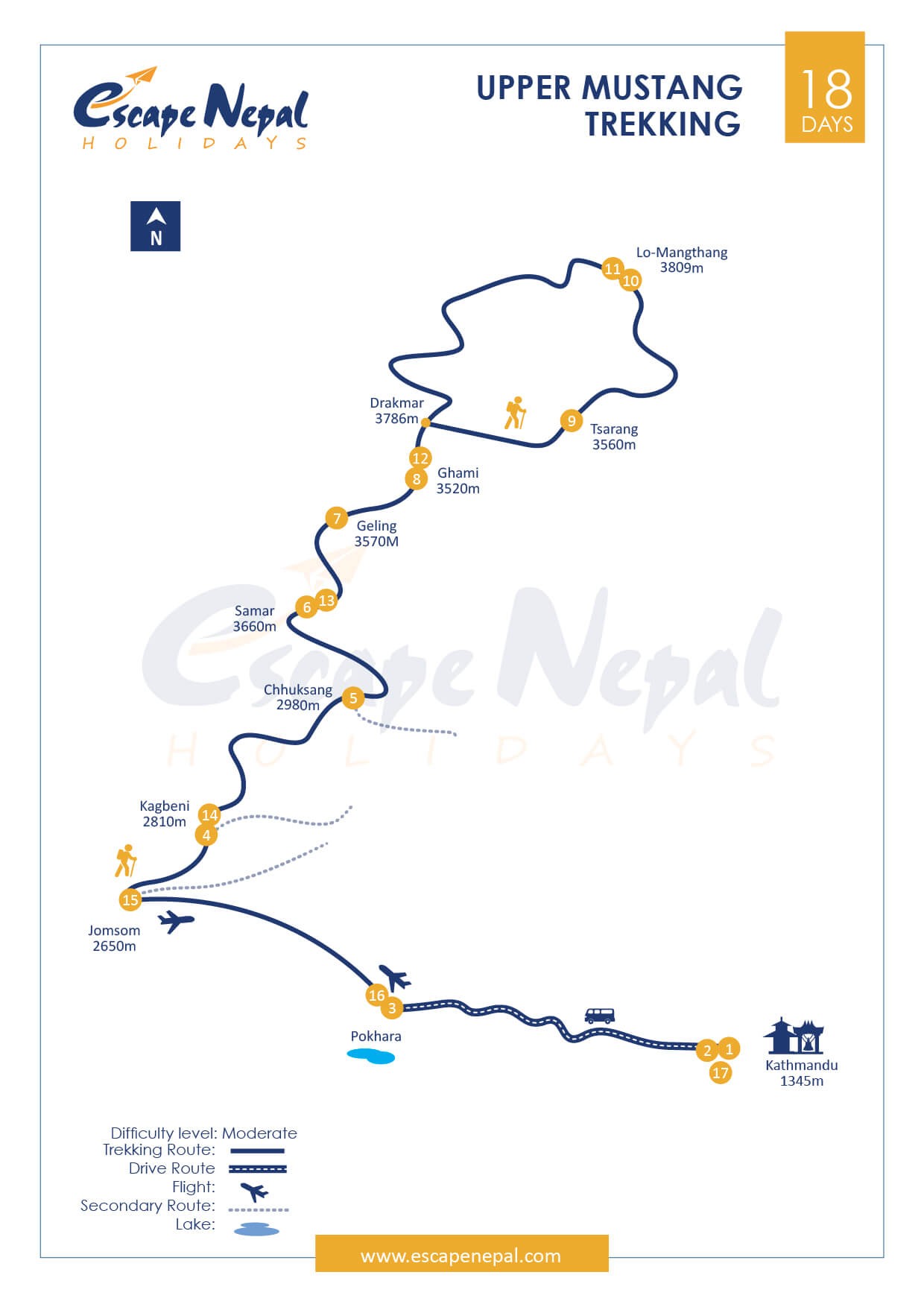