We at Escape Nepal do recommend Langtang Valley Trekking to beginner trekkers and those who have limited time to explore the Himalayas. Depending upon your fitness, you can turn trekking in the Langtang region moderate or difficult. Located north of Kathmandu valley, accessing the starting point of the trek is more convenient than other trekking trails.

Langtang Valley Trek combines Tamang heritage, picturesque villages, dense forests, old bridges, monasteries, and mani walls. The trail goes through the Langtang National Park, home to numerous species of flora and fauna. The number of trekkers entering this region is lower than in other trekking areas, which makes the trail less crowded.

The fluttering prayer flags, majestic mountains, and the tranquility of the region make the Langtang Valley Trek a journey of a lifetime. The rustic surrounding colors of the villages overpowered by white snow-capped mountains and blue sky is as magical as a storybook. Get in touch with us to know more about Langtang Valley Trek.

Sightseeing in Kathmandu involves visits to the UNESCO World Heritage Sites like the sacred Pashupatinath Temple followed by the largest stupa of Nepal, Boudhnath Stupa. Likewise, you will visit the Swayambhunath, also known as the Monkey Temple, and one of the three durbar squares, Kathmandu Durbar Square. There are many other monuments that you can visit in your free time. The tour will be guided by an experienced tour guide who will introduce you to Nepali history and art.

A scenic drive from Kathmandu to Syabrubesi

Syabrubesi is the starting point of the trek. To reach there, you have to take around a 6 to 7 hours’ drive from Kathmandu. The drive goes along the Trishuli River and offers sensational views of small settlement areas surrounded by terraced farms and lush green hills. Likewise, attractive waterfalls and snow-capped mountain views make the drive more pleasant.

This trekking route is also a paradise for bird lovers and biologists. The trail offers sub-tropical to alpine vegetations. You will be trekking through the Langtang National Park home to 1000 species of flora and 150 species of birds. Likewise, if you are lucky enough, you might get to see wildlife like Himalayan tahr, red panda, mus deer, snow-leopard, yak, blue sheep, etc.

The Langtang Valley Trekking route goes through dense forests of pine, rhododendron, bamboo, oak, fir, and various other vegetation. There are many ascends and descends throughout the trek that also involves landslide-prone areas, steep slopes, and rugged paths. The trail crosses many old bridges over streams and passes by cascading waterfalls.

Get to see the unique lifestyle of Tamangs

Langtang Valley Trek is also famous for the rich culture and tradition of the Tamang people. The villages along the trekking trail are resided mostly by people from this community. Their practices, values, norms, language, dress, and assortments are highly influenced by the Tibetans as they are said to be the descendants of Tibetans. The locals follow Tibetan Buddhism.

Kyanjin Gompa is located at 3,870 meters on the foothills of Langtang Lirung, Dorje Lakpa, and Langshisha Ri. Believed to be built more than 600 years ago, Kyanjin Gompa is an ancient monastery closely tied with Tibet. The thangka paintings in the gompas were bought from Tibet centuries ago. The gompa is surrounded by high mountains. There are many statues, prayer flags, butter lamps, and antiques in the gompa.

Beautiful sceneries and panoramic views of the Himalayas

There is longer trek in Langtang Region that include Gosaikunda Lake and Helambu that called Langtang Circuit Trek , Langtang Gosaikunda Lake Trek or you can also combine the trek with Tamang Heritage trail.

After landing at the airport, complete the visa process or any other documentation if needed. You can meet with one of our team members at the terminal gate holding your nameplate.

He will welcome you and take you to the hotel. Your arrival day is free, and you can do anything you want. In the evening, go on a walk and explore the lively streets of Thamel.

It is going to be an exciting day. You will be visiting monuments that date backs to hundreds and thousands of years ago, like Pashupatinath Temple, Boudhanath Stupa, Monkey Temple, and Kathmandu Durbar Square.

The Kathmandu full day tour is guided by an experienced and licensed tour guide who will introduce you to the landmarks and the major events behind them. After the tour, get some rest and meet with the trek guide for briefing & preparation of the trek.

Day 3:DRIVE FROM KATHMANDU TO SYABRUBESHI

The Langtang Valley Trek begins from Syabrubesi, and you have to take a scenic drive from Kathmandu to reach there.

From Sybrubesi, trek along the Bhote Koshi and Langtang rivers. The trail then goes through lush forests and terraced fields, passing by remote settlement areas.

You might also get to see wildlife like red pandas, snow leopard, blue goat, etc on the way. Further, ascend to Rimche (2,400 m) and move towards the Lama Hotel for the night stay.

Walking alongside a river, you gradually ascend through dense forests. The trail offers beautiful mountain scenery. Before leaving Ghora Tabela (3,030 m), register the permits at the army check post.

You will then reach Chyamki village (3,230 m) and pass by mani walls, chortens & prayer wheels to reach Langtang village.

The trail from here ascends to Kyanjin Gompa. It is a small village with an ancient monastery and excellent views of the Himalayan Mountains.

Trekking through yak pastures, remote villages, and meadows, you will slowly ascend towards Kyanjin Gompa. On the way, you come across old water mills, prayer wheels, and rocks with sacred inscriptions.

It is a rest day in Kyanjin Gompa to give your body a chance to acclimatize and relax. The day is free, however, you can explore the village and spend time observing the daily lifestyle of the locals.

There is a famous viewpoint nearby the village called Tserko Ri (5,450 m), where you can go to witness stunning landscapes. Likewise, you can hike to Langshisa Kharka as well.

It is time to return to Lama Hotel. The trail descends following the same route. You trek through dense forests and small villages. Take a small break at Ghora Tabela for lunch and continue trekking down to Lama Hotel for the night stay.

Following the Langtang River, you drop down to a lovely river valley. Further, the trail passes through lush bamboo and rhododendron forests and crosses Langtang and Bhote Koshi Rivers before reaching Syabru Gaun.

Day 10:TREK FROM SYABRUGAUN TO DHUNCHE

The trail further descends to Dhunche. It is going to be an easy and short trekking day today. You will be trekking through forests of pine and rhododendron. Likewise, you also come across a few small settlement areas along the way.

Day 11:DRIVE FROM DHUNCHE TO KATHMANDU

Drive back to Kathmandu early in the morning after having a delicious breakfast. The drive will be long, but views along the way will keep you accompany.

After reaching Kathmandu, you move to the hotel and spend the rest of the day as per your wish. In the late evening, you will be meeting with the team for the last time over a farewell dinner organized by the company.

Day 12:TRANSFER TO AIRPORT FOR YOUR FLIGHT TO HOME

The journey came to the end. Our airport representative will drop you at the airport according to your flight departure time. We will be looking forward to traveling with you in the Himalayas and beyond it again. Until then, goodbye.

You are required to have some permits to do the Langtang valley trek, and they are Langtang National park entry permit and TIMS (Trekkers information management system) permit. We apply and get all these permits for you once you book the trek.

A moderate level of fitness is required with daily trekking between 3 to 8 hours to do the Langtang valley trek as you will reach an altitude of 3870m above sea level. Good health with good stamina and a strong desire for trekking required, and you do not need to have previous trekking experience. However, physical fitness is required.

We provide a 3-star hotel for three nights in Kathmandu and simple lodge/teahouse accommodation for the rest of the eight nights on the Langtang valley trek trail.

The rooms are basic, just a bed with a pillow and blankets on trek lodge/guest house on trekking, and please note some of them are very basic, and a sense of adventure is necessary.

The hotel we provide:

The extra nights hotel in Kathmandu for pre or post the Langtang valley trek is available at the US $55.00 per night includes breakfast and airport transfers.

We provide a total of 28 meals (11 breakfast, 9 lunch, and 9 dinners) on the Langtang valley trek, and these meals are provided in hotels and lodges. You have breakfast and dinner at the lodge where you stay overnights and lunch at the lodge available along the trail.

You can find a wide variety of Nepali and Western meals trek and drinks (coffee, tea, milk, soft drinks, and beer) as well, and the drinks are not included in the cost. So you can buy them yourself on the available lodge/guest house.

We also advise bringing water purification pills/medicine while coming for a trek in Nepal since you have normal water for free so, you can use these medicine and drink, or you can buy bottled/boiled water to drink.

There is electricity available in Kathmandu and in most of the villages of Langtang valley trek, where you can charge your camera/mobile batteries, and you may have to pay some fee to charge. However, we suggest you have spare batteries in case of unavailability.

We provide a professional tourist guide for a day tour in Kathmandu on day 02 and a trained trek guide for the rest of the trek days who handles the logistics and guide you and your team on the Langtang valley trek.

We also provide you a Sherpa/assistant guide when there are eight or more members in a group, and we provide porters to carry your main luggage while on the Langtang valley trek. There is one porter for every two members, and a porter carries about 20 - 22KG, which means 10 - 11 KG from each trekker.

Equipment is very important to have a comfortable and successful Langtang Valley Trek in Nepal. So, you need to pack your gear carefully and pack only the things that you need and not anything that you no need for the trek.

To help you to pack your gear for the Langtang Valley Trek, we have given some list that you should not miss while you are packing. 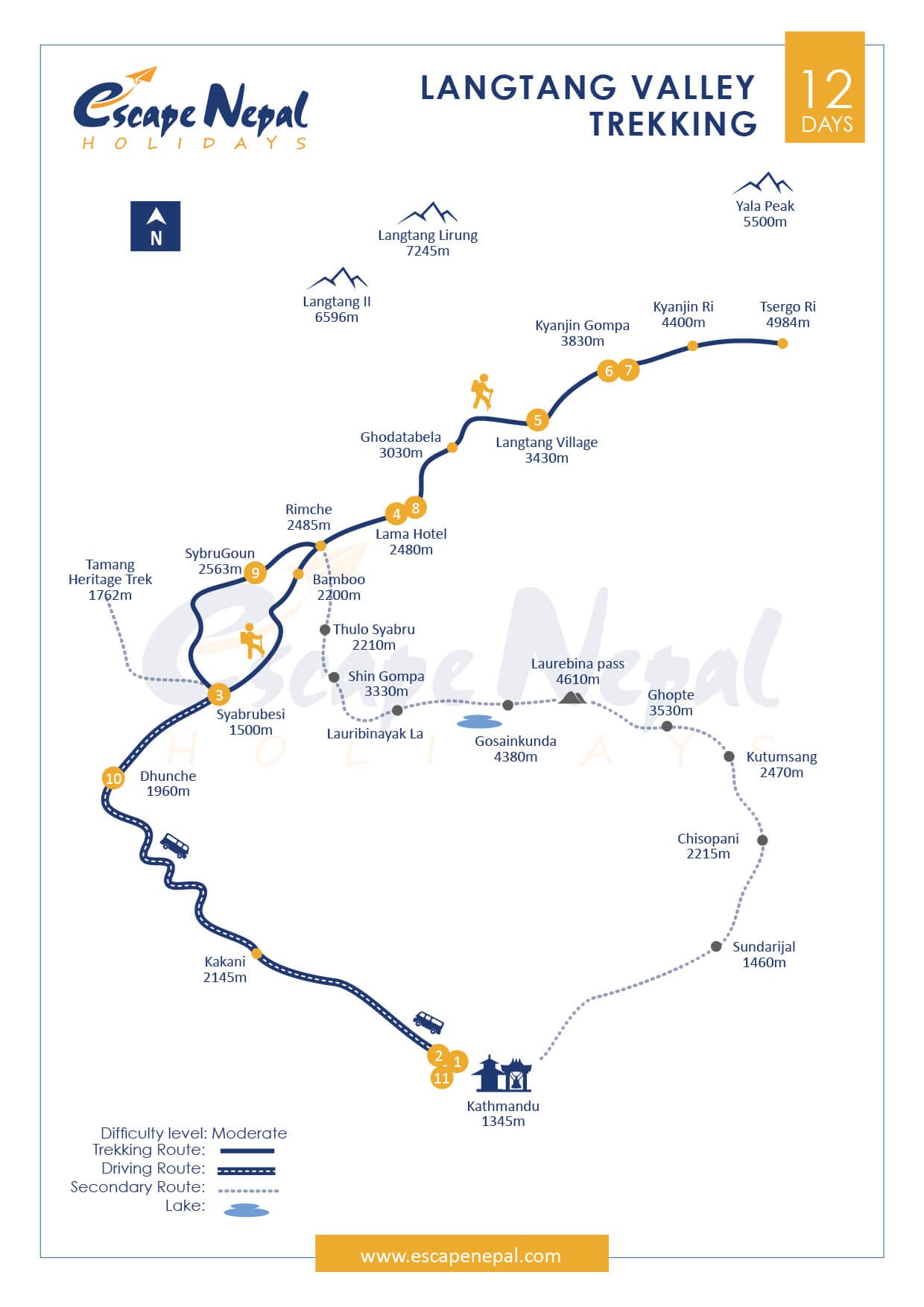