Ama Dablam Base Camp Trek is a short and amazing journey in the Khumbu region that goes through picturesque mountain villages and lush forests, offering a blissful and serene journey.

Ama Dablam Base Camp Trekfollows an adventurous, less-traveled route in the Khumbu region. It is a great alternative to the famous and bustling Everest Base Camp Trek route. The trail cuts off from Pangboche and ascends to the base of Mt. Ama Dablam, known for its spectacular beauty. Moreover, this mountain is considered one of the most beautiful mountains in the world. We have designed this 13 days Ama Dablam Trek itinerary for those, who are seeking a pristine and less-crowded venture in the Everest region.

Standing 6,812 meters above sea level, Mt. Ama Dablam has close ties with the locals of the region. The meaning behind the word 'Ama Dablam' means "Mother's Necklace" because of the perennial hanging glacier, which resembles 'Dablam'- a unique piece of traditional jewelry worn by Sherpa women. Likewise, the view of this mountain from Tengboche looks like a mother's hands protecting her child on each side.

Following the famous route to Everest Base Camp, you trek through Sagarmatha National Park that passes by dense forests, and crossing numerous thrilling suspension bridges over the Dudh Koshi River. The trail takes you to the Sherpa capital, Namche Bazar, where you will spend a couple of nights for acclimatization, and during that, explore around the village. Get to see the daily lifestyle and culture of locals, have intimate interaction with them, and visit some of the centuries-old monasteries along the way, including the oldest and the biggest monastery of the Khumbu region, the Tengboche monastery.

From Namche Bazar, the trail descends & ascends through lovely forests of rhododendron to Tengboche village and continues towards Pangboche. Visit the ancient Pangboche monastery and hike to the Ama Dablam Base Camp, situated at 4,576 meters. The views from the base camp are phenomenal. The trail then traces back its steps and descends to Lukla.

The Ama Dablam trek package includes a guided sightseeing tour of several monuments, where you will be learning Nepali art, architecture, culture, and history. Some of the places you will be visiting during the tour are sacred Pashupatinath Temple, Boudhnath Stupa, Swayambhunath, and Kathmandu Durbar Square.

Located at 2,860 meters, a flight to Lukla Airport is one of the thrilling flights one can have in his/her lifetime. Not over exhilarating, the spectacular views of the Himalayas during the flight and thrilling landing at the short runway of Lukla flight adds more adventure to the journey.

The Sagarmatha National Park begins from Monjo onwards at 2,845 meters and spreads up to 8,848 meters, the highest point on Earth, Mt. Everest. The trail ascends through the park, where you will be crossing many streams and wooden/suspension bridges. Similarly, you will trek through dense forests of rhododendron, magnolias, blue pine, chir pine, juniper, and hemlock. On the way, you might also come across birds like the golden eagle, snow pigeon, yellow-billed, and red-billed choughs, along with Himalayan animals like blue sheep, yaks, snow leopards, etc.

The Ama Dablam Base Camp Trek route weaves its way through remote mountain villages and many small settlement areas. Some of the villages you will be walking through are Ghat, Phakding, Jorsale, Namche Bazar, Tengboche, Pangboche, etc. You can see the daily lifestyle of the locals, doing their daily chores. People from several different communities like Sherpa, Rai, Limbu, Bhote, etc live in the villages along the trekking route. Get to see their tradition, practices, and norms, and learn their values & beliefs.

Namche Bazar is the tourist hub of Khumbu region. This village has most of the facilities like the ATM lounge, better WiFi service, numerous cafes & restaurants, souvenir shops, and museums. While spending a couple of nights in this village, you will visit the Everest Photo Gallery and Sherpa Culture Museum. Likewise, you will go on short excursions to places like Syangboche Airstrip, Everest View Hotel, and Khumjung monastery.

Ama Dablam Base Camp is situated at 4,576 meters. The views from the base camp are surreal. Surrounded by snow-covered mountains and glaciers, it feels like standing in heaven. On Ama Dablam Base Camp Trek, you get accompanied by breath-taking landscapes and panoramic views of the Himalayan mountains like Mt. Everest (8,848 m), Mt. Lhotse (8,516 m), Mt. Nuptse (7,861 m), Mt. Thamserku (6,623 m), Mt. Ama Dablam (6,812 m), Kongde Ri (6,187 m), Mt. Pumori (7,161 m), and many others. Likewise, you can see glaciers and small lakes along the way. Every new village will unfold a distinct scenery for you, and it will only get better.

Day 1:ARRIVE AT KATHMANDU AIRPORT AND TRANSER TO HOTEL

Say hello to our team representative at the international airport. Collect your luggage and drive to the hotel in a private tourist car/van. In the remaining day, feel free to explore around the hotel and end the day dining in one of the lively restaurants in Thamel.

Known as the City of Temples, a one-day tour is not enough to visit all the monuments in Kathmandu. Still, our day tour in kathmandu will take you to some of the must-visit sites like the holy Pashupatinath Temple, Boudhnath Stupa, Swayambhunath, and Kathmandu Durbar Square.

Later in the day, meet with the trek guide and have a small briefing about the trek. Do final packing and shop if any gear is missing.

Day 3:FLY FROM KATHMANDU TO LUKLA & TREKKING TO PHAKDING

Fly to Lukla early in the morning, which is the starting point of the trek. It is a short flight that offers tempting aerial views of the Himalayan scenery. From Lukla, you will begin trekking towards Phakding.

The route descends through lush forests and Ghat village. Phakding welcomes you with stunning views of Kongde Ri.

Gradually ascend following a steep and rugged trail towards Namche Bazar. You will reach Monjo, from where the trail goes through dense forests, crossing numerous suspension bridges. Pass by small settlement areas and get to see a diverse range of flora on the way.

An acclimatization day to keep you away from altitude sickness. The day begins early in the morning with a hike to the Everest View Hotel and Syangboche Airstrip. Enjoy delicious breakfast looking at breath-taking views of the snow-capped mountains like Mt. Everest, Mt Nuptse, Mt Pumori, Mt. Lhotse, Mt. Ama Dablam, and others. Later in the day, explore the Namche Bazar and get to see the daily lifestyle of Sherpas.

Day 6:TREK FROM NAMCHE TO TENGBOCHE

Trek above the Dudh Koshi River valley, savoring the heartwarming views of the snow-covered Himalayan mountains. You will pass by beautiful mountain villages and descend steeply to Phunki Tenga.

The trail crosses a bridge and goes through lush forests of rhododendron to Tengboche. On the way, you can see several species of birds. Explore the largest and the biggest Monastery of the Khumbu region, Tengboche monastery.

Day 7:TREK FROM TENGBOCHE TO PANGBOCHE

The trail further moves up the valley and winds through lovely rhododendron forests. You will be crossing Imja Khola and pass by mani stones. Pangboche is a picturesque village, where you get to visit an ancient monastery. Prepare for the ascend to Ama Dablam Base Camp later in the day.

Day 8:HIKE TO AMA DABLAM BASE CAMP & RETURN TO PANGBUCHE

The trail from here onwards to the Ama Dablam Base Camp is gorgeous and adventurous. Not traveled usually by the trekkers, the trail is unspoiled and pristine. Wake up early and get ready to trek. The trail crosses Imja Khola and ascends towards the base camp. The views along the way are surreal.

Ama Dablam is a divine mountain with great importance to locals. You can see fabulous views of other mountains from the base camp. After spending some time at the base camp, return to Pangboche to spend the night.

The trail retraces the route back to Namche Bazar. Descend gradually through small villages and lush forests. Pass by Tengboche village and follow a downhill path through dense forests & small settlement areas to Namche Bazar.

A long day is ahead of you, So, gear yourself with a delicious and filling breakfast. Descend from Namche Bazar to Phakding, crossing several bridges and dense forests. The trail goes through small villages like Monjo, Phakding, Ghat, etc..., before reaching Lukla.

Day 11:FLY FROM LUKLA TO KATHMANDU

Another thrilling flight from Lukla takes you back to Kathmandu. Upon landing at the airport, move to the hotel. Rest for the day, enjoy spa or body massage to relax your sore muscles.

Or, Go shopping tour in kathmandu and end the day with a delicious dinner as per your desire.

Today is your last day in Kathmandu. Visit monuments like Bhaktapur Durbar Square and Patan Durbar Square. Later in the day, explore the local market and do souvenir shopping.

Day 13:TRANSFER TO AIRPORT FOR YOUR FLIGHT TO HOME

Pack your belongings and check-out of the hotel. Our airport representative will be at your hotel lobby to transfer you to the international airport.

Permits required to do the Ama Dablam Base Camp Trek

You are required to have some permits to do the Ama Dablam Base Camp Trek, and these are Sagarmatha national park entry permit, TIMS permit, and entry permits from Khumbu - Pasang Lhamu Rural Municipality. We at Escape Nepal apply and get all these permits once you book the trek from us.

We provide 3-star hotel accommodation for four nights in Kathmandu (Two night pre and two nights post the Ama Dablam Base Camp Trek) and simple lodge/teahouse accommodation for the rest of the eight nights. The rooms are basic, normally just a bed with a pillow and blankets on trek lodge/guest house and Please remember that some of them are very basic, and a sense of adventure is necessary.

Meals and Drinks on Ama Dablam Base Camp Trek

You find a wide variety of Nepali and Western meals on the Ama Dablam Base Camp Trek and drinks (coffee, tea, milk, soft drinks, and beer) as well. However, the drinks are not included in the cost. You can buy them yourself on the available lodge/guest house.

We advise you to bring water purification pills/medicine while coming for the Ama Dablam Base Camp Trek since you have normal water for free, use the medicine and drink. Or you can buy bottled water or boiled/safe water to drink. 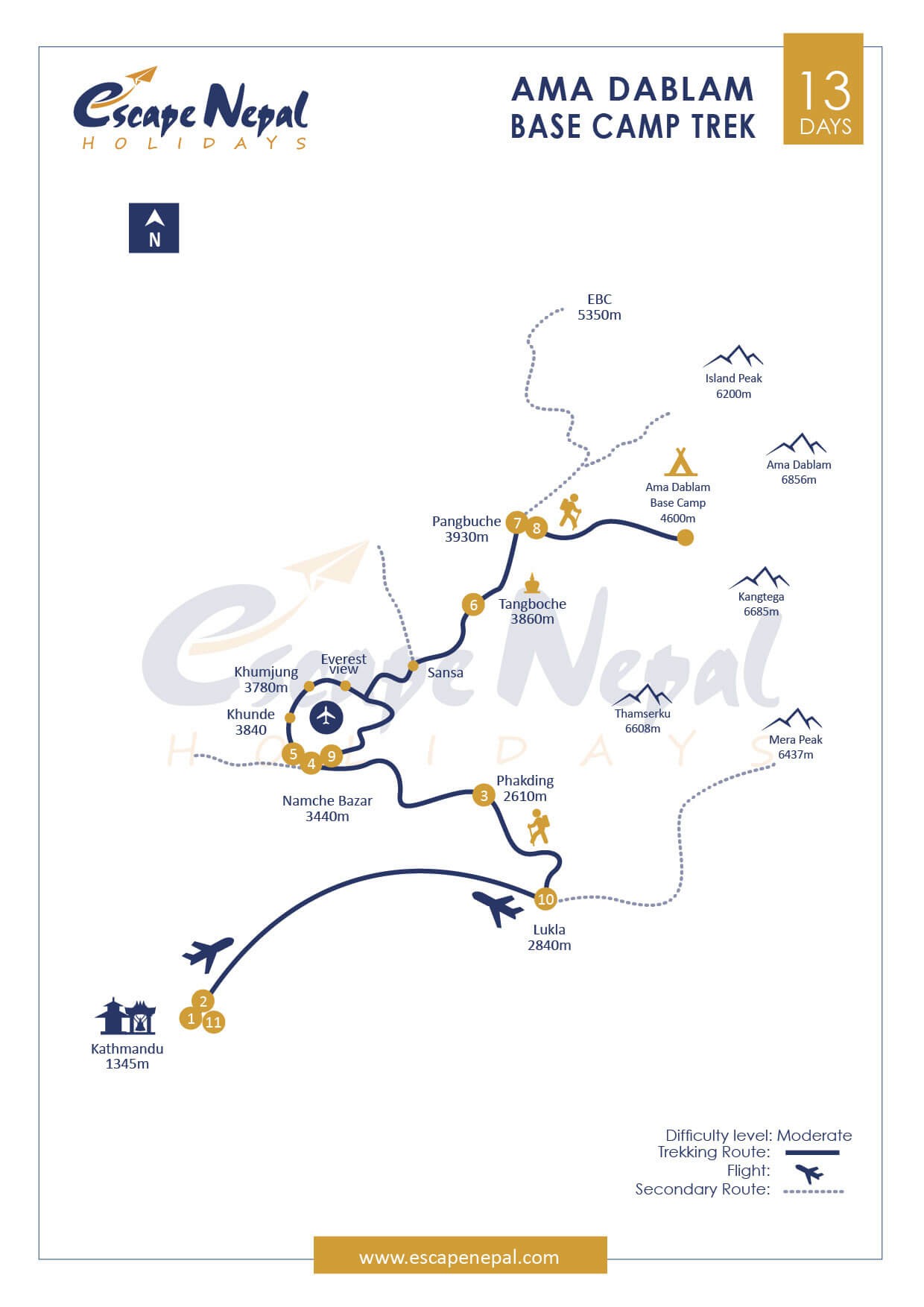